Rosenstengel was the strongest possible advocate of the vast array of magnificent timbers that were at his disposal through the first half of the twentieth century. Silkwood (Queensland Maple), Northern Silky Oak and Hoop Pine were the staple choice for most of his output but he also used Silver Ash, White Silkwood, Rose Maple, White Beech, Queensland Walnut, Silver Aspen and Black Palm (feature work only). Although some may exist, I have never seen an example of Rosenstengels’ work produced from anything other than select Queensland timbers. Rosenstengel was also very careful in the preparation of timber prior to use, preferring to air dry material in his yards to ensure full and correct seasoning. Notes suggest his rule of thumb applied was a full year of seasoning for every inch of rough sawn thickness. For large section material, such as that used in the turning of bulbous table legs, this resulted in seasoning periods of more than six years.

Of course, there is no doubt that Rosenstengel was indeed spoilt for choice in relation to timber selection given the vast areas of native virgin growth stock that were being harvested throughout Queensland during the period of his operation. Quality timber was even then a very expensive resource, (much more expensive than now actually in relative terms), but despite the expense, Rosenstengel as a designer recognised the incredible opportunity that such magnificent timber presented him. He was extremely thoughtful in the selection of the highest quality timbers to be featured in his work. A brief discussion of the most common timbers of construction is included below. 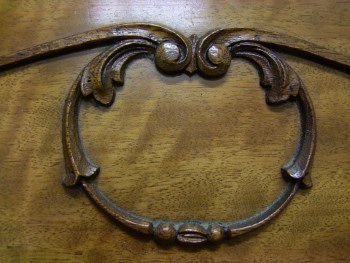 More correctly referred to as Queensland Silkwood, Queensland Maple was a trade name applied to a number of similar species that quite rightfully hold a place amongst the most magnificent cabinet timbers of the world. Silkwood was, and still is, recognised by many as the equivalent of the South American Mahoganies and European Walnuts in terms of density, firmness, closeness of grain, workability and figure. The two trees producing Silkwood only occur in a restricted range of North Queensland tropical rain forest, notably on the Atherton/Ravenshoe tableland (Note: the timber sold today as Pacific Maple is actually an unrelated Lauan specie commonly sourced from the Philippines and a timber of much lower quality). Felling records of 1927 show that logs less than 6 ft in girth were not hauled which gives an indication of the size of log and quality of timber that was available at the time. From the 1920’s to the 1960’s, Silkwood was one of the most expensive timbers on the Australian market and select figured cuts of the type used by Rosenstengel for feature panels carried a significant cost premium. The close grain and firm texture of Silkwood made it particularly suitable for carrying the fine detail required in high quality carving, and for this reason, much of Rosenstengel’s finest work was done in this timber. Highly featured fiddleback, birdseye or flame figured stock was available, often coming from the butt end or buttress of the log. Such timber, although beautiful, presented enormous challenge to the craftsman due to the tendency of the wild grain to tear or pull out during machining. For this reason, figured timber was extremely time consuming to prepare, often requiring significant handwork in the form of handplaning or scraping to produce a flat surface ready for polish. Silkwood was the common timber used by Rosenstengel for bedroom suites whilst living room and dining room furniture appear to be more commonly made from Silky Oak. This has less to do with the individual qualities of the timber and more to do with the furniture styles and preference of his clientele. Whilst designs conceived of the Jacobean or Tudor style were more suited to the bold figure of Silky Oak, Silkwood was perfect for the more refined pieces that Rosenstengel made that were influenced by the periods of Louis XV and XVI.

Although a number of different species of “Silky Oak” were used by Rosenstengel, Northern Sil 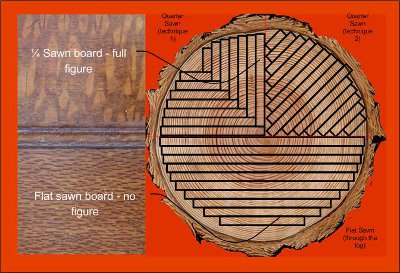 ky Oak (Cardwellia sublimis) was dominantly the specie of choice.  Northern Silky Oak is confined to the coastal and tableland areas of North Queensland from the Paluma range near Townsville northward. Both southern species however, occur in the mixed coastal watersheds and rainforests of South East Queensland through to the Dorrigo plateau of New South Wales. Silky Oak was an extremely popular cabinet timber in both solid timber and veneer from the 1920’s to the 1950’s. It is of course not a true Oak but takes its name from the large medullary rays that provide the unique oak like figure. Unlike Silkwood where the figure of the timber is a result of the unique properties of the individual tree, the figure of Silky Oak results from the way the timber is sawn. The highly prized “Corn Flake” or “fish scale” figure of Silky Oak is only available in quarter sawn boards (see figure at right) a process that ensures the saw cuts are perpendicular to the growth rings and parallel or through the medullary rays of the log. Flat sawn boards in comparison are rather plain and lacking in figure. Quarter sawing a large log was a relatively complex operation in comparison with flat sawing where the log could simply be passed straight through the saw and cut into boards or flitches. The process of quarter sawing not only took much longer at the mill but it resulted in a higher percentage of wastage. You can also see from the diagram that to produce wide quarter sawn boards required very large diameter mature logs. For this reason, wide quarter sawn boards of silky oak are now extremely difficult to source. Rosenstengel typically selected feature quarter sawn boards for areas of greatest impact in his cabinet work such as sideboard tops and door panels. The plainer back sawn material was typically used on the rails and stiles of door or panel frames where quarter sawn material has a tendency to look busy or distracting. Although not as difficult to work as figured Silkwood, quarter sawn silky oak also had a tendency to pull or tear during machining. For this reason, hand finishing with hand plane and scraper was also required on figured boards. The open grain of silky oak required more work in the finishing shop as the grain needed to be filled to result in an even gloss finish. Quarter sawn silky oak had the added benefit of being very stable and resistant to warping and for this reason Rosenstengel often used it as a substrate over which veneers could be applied. As a lover of Queensland timbers I must confess to having a love hate relationship with the dark ebonised finish that became a hallmark of Rosenstengel’s Tudor influenced work. This finish can often obliterate the superb figure of the timber, undoubtedly the reason why so many of his pieces have suffered the ultimate misfortune of being stripped and lightened in colour. Can I simply advise, DON’T DO IT !! Although Southern Silky Oak, a grevillea common around the suburbs of Brisbane, remains a relatively common specie, access to Northern Silky Oak is now very limited due to the remaining stands being protected in the listed World Heritage Rain Forests of North Queensland.

Queensland pine is a firm, strong and fine textured coniferous softwood which by sheer weight of volume was the most important commercial species of the Queensland timber trade. Hoop pine crowns dominate the mountain skylines of what is left of the rainforests of the upper Brisbane and Mary River Valleys in South Queensland, with smaller numbers northward to Mackay and southward over the border ranges extending into the Northern Rivers District of New South Wales. Heavily used by Ed Rosenstengel as a secondary wood for cabinet backs, drawer sides, shelving etc, it was also used as a primary wood on lower cost items that he produced, always dark stained to resemble a higher cost hardwood. Hoop pine also found favour as a substrate for veneer and was the wood of choice for painted or high quality ivory lacquered items due to its ability to take a beautiful painted finish with no sign of grain or pore structure. Although it was suitable for basic carving, highly detailed fine carving, even on painted items, were always executed in Silkwood or White Beech as pine is not of sufficient firmness for such work. The use of hoop pine as a secondary timber is clear evidence of the high cost of primary timbers such as Silkwood and Silky Oak. It was clearly more cost effective to pay the labour required to laminate a strip of first quality hardwood (Silkwood or Silky Oak) to a wide board of hoop pine in the making of a shelf or carcase base than it was to save labour and use a full width board of primary wood.