Edmund Rosenstengel was born in what was then the small town of Toowoomba, on the edge of the rich pastures of the Darling Downs of Queensland in February 1887. Despite many sources reporting Ed’s father as a cabinetmaker, he was actually an upholsterer who migrated to Australia from the Westphalian region of Germany in 1867, later establishing the very successful furniture manufactory “Rosenstengel & Kleimeyer” in Toowoomba. Ed, one of 12 children, and reportedly the only child to show any talent as a craftsperson, was apprenticed into the family business at the age of 15. For three years he worked at the bench gaining experience and skills in the cabinetmaking trade. As was customary in Europe, Ed decided to become a journeyman cabinetmaker at the age of 18, which required him to leave his fathers’ establishment and broaden his opportunities and experience by travelling and working at other cabinet shops.

Ed’s first stop was Sydney, where he doorknocked seeking employment as an apprentice. His skills were found to be inadequate for full time employment resulting in six sackings in six weeks.  Facing the sack from his seventh employer, Ed demonstrated the steely commitment and business acumen that would later become his hallmark. He approached his boss, an old Danish craftsman, and offered to pay his own wages for 20 weeks in return for support and training in the trade. It seems he was an outstanding success, staying on in Sydney for 12 months with the year that followed spent in Auckland New Zealand. Still more distant shores beckoned, and in 1908 Ed and several workmates boarded a ship to Vancouver Canada where he secured a position in a local timber company later establishing a successful furniture repair shop. Following the sale of the business, Ed travelled to Grand Rapids USA where he would have gained priceless experience in cabinet shops of a scale unimaginable in Australia. At the turn of the 20th century, Grand Rapids Michigan, known as the “Furniture City”, boasted more than 50 furniture factories with almost half of its population of some 90,000 involved in furniture manufacturing and related industries.  This experience would undoubtedly have shaped Rosenstengels’ appreciation of cost efficient manufacture of production furniture and built the foundation for much of his later success. 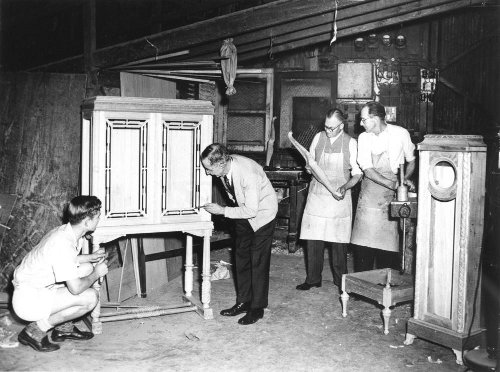 Returning to Australia in 1911, Rosenstengel rejoined the family business in Toowoomba and married in 1914. Although furnished with a steady line of orders, Rosenstengel found Toowoomba lacked the opportunities he desired and in the year of 1922 had decided to establish his own company in Brisbane under the trade name of “Ed Rosenstengel Furniture”. The establishment was located in what was once Brisbane’s first movie theatre, The Coliseum, at 524 Brunswick Street Fortitude Valley.

The early years of production presented little indication of what was to come, as designs were largely based on what Ed had been producing for Rosenstengel & Kleimeyer in Toowoomba. Traditionally Arts and Crafts in style, these early pieces were basic in both form and function and were dominantly made of Northern Silky Oak (Cardwellia sublimis). By the mid 1920’s though, Ed’s keen interest in the decorative arts began to influence his designs and the square legged arts and crafts style gave way to detailed turning and carving based on traditional French and English ornamentation. In the manner of the great 18th century English designers such as Chippendale, Sheraton, Hepplewhite and the Adam brothers, Ed Rosenstengel developed a unique style through his own interpretation of period designs. Every piece that Rosenstengel sold was designed by him, and being meticulous about quality, every piece also received his personal inspection.  Inside his Brunswick St premises, Rosenstengel created a lavish furniture showroom where clients could view his designs in a household environment. Specific rooms were dedicated to the display of furniture types including Bedrooms, living rooms and even displays dedicated to the needs of newlyweds. Ed Rosenstengel regularly customised or reinterpreted the design of showroom items through discussions with his clients and his display rooms would have assisted his customers in visualising their furniture prior to purchase. Prior to taking an order, Rosenstengel worked to understand both his customers needs and the style and size of home in which the furniture would be located. For him it was important that the furniture style was sympathetic to the size of the room in which it would be housed. Much more than a furniture designer, Ed Rosenstengel was also a qualified interior designer and for wealthier clients he offered a full interior design service which included the sale of rugs, fabrics and ceramics in addition to the design of specially commissioned items of furniture. During his 36 years in business, some of his more notable commissions included:

As impressive as some of the above commissions were, Rosenstengel’s most notable work can be seen in the elaborate pieces that were crafted for his own home in Harcourt Street New Farm. Historical photographs show the home filled with unique designs which included; interior joinery, magnificent sideboards and serving tables, dining suites, bookcases to house his vast collection of decorative arts printed media, chairs, occasional tables, desks, gilded mirrors and an elaborately carved piano.

Testament to his undeniable business acumen and unwavering commitment to quality is the fact that Ed Rosenstengel managed to successfully navigate his business through both the great depression of the 1920’s and the Second World War. The war years in particular were an immense challenge for Rosenstengel. The Commonwealth Department of War Organisation of Industry required him to restrict his output to certain furniture types allowable by permit under the department’s authority. The prices for any items sold were also required to not exceed the ceiling permitted by the prices regulation orders of the day. Add to this the difficulties in obtaining materials of construction including timber and fabrics and it is easy to understand why during this period Ed Rosenstengel was forced to reduce his staff to 8 tradesman and two apprentices. Tormented by such restrictions, Rosenstengel wrote in 1944, “I find the aesthetic and creative senses sluggish almost to a state of paralysis”. 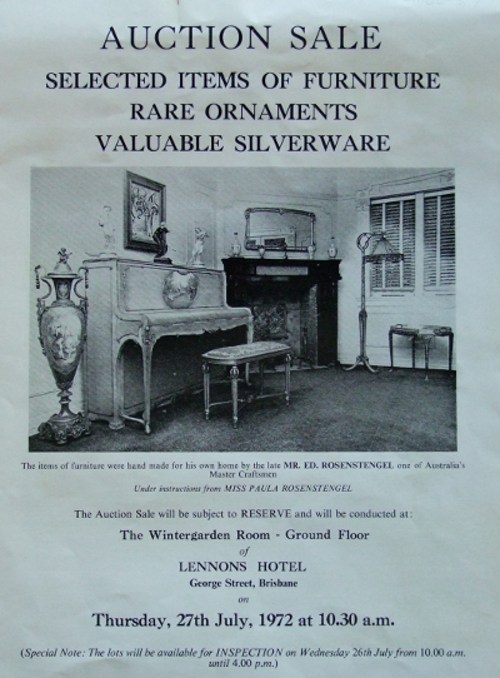 With the war years behind him, Rosenstengel was again able to return some sense of normality to the business. Orders began to flow and by the early 1950’s his workforce had returned to 25 in number with output rivalling the pre war years when his business was at its peak. In 1955 with Ed Rosenstengel’s health failing his daughter Paula Rosenstengel joined the business, however, Rosenstengel announced the eminent closure of the company in 1956. A flurry of orders for final pieces from his loyal clientele required Rosenstengel to remain in business until March 1958 at which time he decided to close the business rather than risk his reputation being tarnished under the direction of alternative management.

By all accounts Ed Rosenstengel was a quiet unassuming man, and during his brief retirement he was finally able to lead an unhurried life furthering his studies of 18th century furniture and decorative arts, whilst enjoying the wonderful furniture, silverware and ceramics that he had managed to accumulate throughout his career. Rosenstengel passed away on the 11th October 1962 and in 1972 a portion of his collection of furniture and decorative arts was sold at Public Auction by his daughter Paula Rosenstengel.