Rosenstengel’s output during his 36 years of business in Brisbane was prolific and would amount to many thousands of individual pieces. This success was in no small way attributable to the fusion of traditional styles that he established as his trademark. Rosenstengel was a keen student of the decorative arts throughout his working life and amassed a significant library of reference material on furniture history and design. A wonderful selection of books from Rosenstengel’s personal library are available for viewing at the Fryer library and the Architecture/Music folio of the University of Queensland.  These books were a constant source of inspiration for Rosenstengel as he developed his own interpretation of period styles. Rosenstengel noted that styles which held interest during the Tudor days were still considered fashionable in his time and this was vindication of his belief that period styles had evergreen appeal. Rosenstengel however saw no merit in slavishly replicating historical pieces in the manner of reproduction furniture. Through the blending of styles from different periods he set out to produce items of unique appeal. Rosenstengel called this, “inter

preting tradition in the language of today” and he firmly believed it was possible to produce a style that was an improvement on those from which it was based. Rosenstengel openly declared this within his advertising as shown at right. The text reads:

“Sheraton, Hepplewaite – Old Masters of bygone days supplied the inspiration for the furniture maker of to-day. Rosenstengel craftsmen are not too proud to draw from the ideas of the Old Masters. The classic lines of period pieces are rich in suggestion and inspiration. Rosenstengel craftsmen adapt those classic lines and curves to the needs of today – and they do it at the factory price”

Of course there was nothing new about the development of new styles through a reinterpretation of classical designs.  All the legendary designers of the 18th century, admired so much by Ed Rosenstengel, including names such as Chippendale, Sheraton, Hepplewhite, Shearer and brothers Adam employed this approach. Adam, Hepplewhite and Sheraton in particular excelled at reinterpreting classical motifs into a modern elegant style and this is exactly how Rosenstengel saw the development of good design. Rosenstengel was very particular about the application of ornament on furniture he produced. He noted that, “Ornament must be used with restraint. It is nauseating to find a piece of furniture on which ornament is overdone and fighting for space on which to settle. Its main purpose is as a contrast to plain surfaces”. The use of ornamentation in the form of delicate carving was a distinctive feature of Rosenstengel’s work. Acanthus leafage, husks, wheat, ribbons, swags, paterae, paw feet and roses in particular were used to great effect in many of his designs and these features were often bordered by beaded or thumbnail mouldings carved in rope work detail. 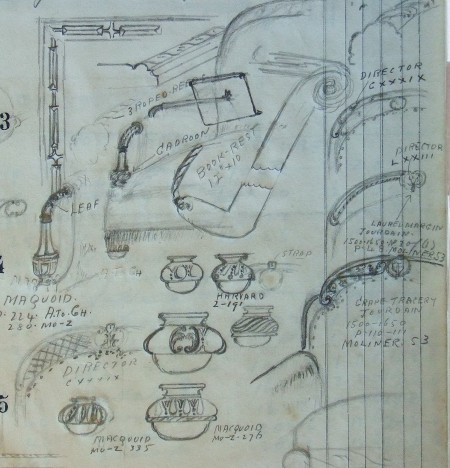 To assist in an understanding of how Rosenstengel approached the blending of styles in the development of an individual design, it is perhaps best to look at an example from his own sketchbook. The selection of sketches shown were produced during the design of a bible or reading chair for Rosenstengel’s Newfarm home. Within the sketches are notes which refer to titles held within his library of reference material on furniture design. References are made to authors such as MacQuoid, Jourdain, Molinier, Harvard  and Chippendale himself through his famous reference book identified as the Director. Rosenstengel considered Chippendale one of the greatest designers and he owned an original 18th century copy of, “The Gentleman and Cabinet Maker’s Director”, now held in the Fryer library. From this sketch it is clearly evident that the design of this chair was a blend of artistic elements from the early renaissance period through to late Georgian with both English and French influences. For comparison with the sketch, the finished bible chair in all its glory is reproduced below. 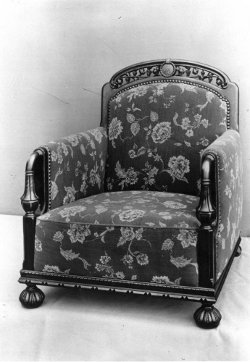 Design ability wasn’t the only skill that Rosenstengel admired in Chippendale’s work. Chippendale firmly believed it impossible for a cabinetmaker to succeed without mastering the skills of perspective drawing and went as far as to say that this skill was “the very soul and basis of his art”. Rosenstengel was also a strong believer in the importance of drawing skills for effective cabinet making and spent long hours at the drafting table working on his designs and producing sketches of high quality. These artistic skills were undoubtedly passed onto his daughter Paula, who became an established artist in her own right.